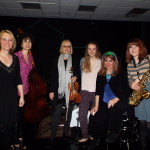 It’s become a tradition to feature some of our incredibly talented female instrumentalists and vocalists from the region for a series of concerts during March to celebrate Women’s History Month. In addition to showcasing the outstanding musicianship, we’re also putting together a program of music written by women. Below find the series of dates and more info about each of the nine performers. The stories about the songs will be featured over the next two weeks for the Women in Jazz Fact on the Whole World in Her Hands Facebook page – join and enjoy!  See you March 11 at the Jazz Kitchen or one of the other locations in the series.

“The main problem in the public perception of women in jazz is not a resistance to their potential future roles, but a failure to recognize the profound impact those musicians have already had on the game.”

Carolyn Dutton (violin) has spent more than thirty years in the New York music scene performing on Broadway and in countless musical ensembles. A decade ago, she returned to Indiana and earned a Masters in Jazz Studies from the IU Jacobs School of Music.

Shawn Goodman (clarinet) holds a Masters Degree in Clarinet Performance from Butler University, where she also teaches and recently served as the president for the Indiana Chapter of the International Association of Jazz Education. And yes, you may call her the Queen of Swing.

Amanda Gardier (saxophone) can frequently be seen in the Indianapolis area with Charlie Ballantine and the Tucker Brothers as well as her own groups. She is a woodwind specialist and teaches at Creekside Middle School.

Jess Henry (trumpet) is from Pittsburgh, PA and currently pursues her masters degree in jazz studies at Indiana University where she is the lead trumpet player for Brent Wallarab’s Jazz Ensemble as well as the Singing Hoosiers Band.

Monika Herzig (piano) recently signed with Whaling City Sounds for the release of her new album “The Whole World in Her Hands” featuring female instrumental leaders such as Leni Stern, Jamie Baum, Jane Bunnett, Linda Oh, Lakecia Benjamin, and more. She was also named the 2015 Jazz Journalist Assoication Jazz Hero for the city of Bloomington and is the author of “David Baker – A Legacy in Music”.

Janiece Jaffe (vocals) has toured the world as a jazz singer as well as leader of sound meditations. She has shared the stage with the likes of Bobby McFerrin and headlined at the Brubeck Institute and much more.

Hannah Johnson (drums) is from Wisconsin and currently pursuing a degree in jazz studies at Indiana University where she is a member of numerous ensembles and a member of Steve Houghton’s studio.

Hannah Marks (bass) is from Des Moines, IA and was one of four bassists selected nationwide to attend the Dave Brubeck Institute summer program 2014. She was the Valedictorian of the Theodore Roosevelt High School Class of 2015 and joined the IU jazz studies program Fall 2015.

Lauren Robert (vocals) is an actor, singer, playwright and former Epic recording artist. She has toured the world and won awards for her original musicals, currently she can be heard with her group Soul Medicine.