A Week in Berlin 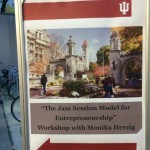 This is the second segment of the Sabbatical research semester travels in Europe. I spent this past week in Berlin, the growing cultural and entrepreneurial hotspot in Europe. In fact – just last month more than 5,000 new businesses were registered in Berlin, more than anywhere else in Germany. As part of the ongoing research on the Jam Session Model for Entrepreneurship the creative scene in Berlin seemed the perfect place for further inquiry and explorations. I arrived in Berlin Monday night after a short flight from Vienna and spent a night at the adventurous Hotel A 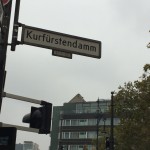 dam in Berlin/ Charlottenburg nestled in the courtyard of an apartment complex. On Tuesday I explored the famous Kurfuerstendamm modeled after Paris’ Champs-Elysees, Bismarck lobbied initially in 1883 for a great expansion of the connection to Grunewald, expecting the street to become the center for leisure traffic and tourism. And it did – Berlin’s millionaire community moved 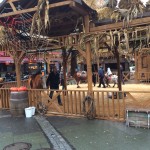 into the Grunewald Villas and traveled on Sundays to the Halensee Zoo over the Kurfuerstendamm which also became the High Society shopping street. The adjacent pedestrian zone hosted a variety of booths preparing for Halloween – a holiday with no cultural roots in Europe, but an economic adoption.

I met up with my host, Professor of Cultural Management at the Franz Liszt University in Weimar, Steffen Hoehne. He treated me to a tour of the current construction at Parochial Church. The church was bombed in 1944 and the elaborate Carillon was

destroyed. This past weekend the restored Carillon could be heard for the first t 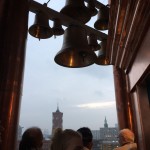 ime again  – what a fascinating mechanical piece of art with individual bells connected to each pitch and positioned in the tower. Here is the song “Der Mond ist aufgegangen”, which was the last song played on the night before the church was destroyed – now performed

again on the restored Carillon. Fascinating are also the sculptures in the lobby – a dichotomy of life and death.

We drove on to Weimar – a historic city that was the Center of Enlightenment with writers Goethe and Schiller, of music under composers such as Liszt and with Chopin in residence, as well as the Bauhaus architecture movement with artists and architects Werner Kandinsky, Paul Klee, Walter Gropius and many others. Throughout the next day I visited

classes, performances, and explored the sights in order to determine options for collaborative programs between the Universities. The opportunities for cultural learning would be immense!

On Thursday, I took the train to Berlin and met up with entrepreneur/ musician Max Keilbach for a skype brainstorm with collaborators Erik Lehmann in Augsburg and David Audretsch in Bloomington, IN with the goal of a book publication on the Jam Session Model. It’s a very exciting project with this group of leaders in Entrepreneurship. Inspired and with lots of new ideas I sought out the Thursday night jam session at a little cultural space called Zanjabil. I met up with my brother-in-law Ralf and his girlfriend and actually got to jam most of the night being the only pianist presented. Fantastic players and lots of fun! 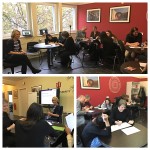 Friday was the day of the workshop at the IU Gateway Office. With a group of 10 entrepreneurship students and four professionals in the field we explored the concepts of creativity and the jazz combo and gathered options for applying the concepts to their respective fields. I can’t wait to learn about all the different results.

In the evening, I made my way to the tiny Zig Zag club where guitar 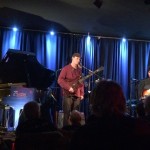 ist Kurt Rosenwinkel celebrated his birthday and introduced a new group project. The concert was fantastic – a mix of Pat Metheny sound with contemporary Brazilian grooves, incredible musicians and great music. And experiencing it in a small room with about 50 people up close and personal is one of the treasures only to be found in a city like Berlin.

Saturday I explored some of the flea markets and shopping areas. My suitcase, a faithful companion throughout six years of travels across continents, had lost a wheel and the bottom had fallen out. I found a fancy replacement in Kaufhof. The night outing was the famous A-Trane Jazzclub in Charlottenburg. Jam sessions start at midnight and continue until the wee hours in the morning. A young trio led and it was interesting that mainly guitarists joined, several rhythm section players and only two trumpet players. The music was on a high level although not with any outstanding moments. In any case, I was glad this was the night where we gained an hour due to the summertime change and the 4pm return became a 3pm return.

After sleeping in on Sunday, I found a fantastic brunch with jazz just around the corner from me in the Yorkschloesschen – a cute little restaurant with an incredible buffet. Jazz was served this morning by Rudi Neuwirth and Marc Loewenthal – vocal/ piano duo of the finest. They were nice enough to invite me to the stage for a version of All of Me with Rudi and we chatted for quite a while afterwards. It seems that economic hardship has also

affected the Berlin jazz scene but everyone is extremely nice and welcoming. During the A-Trane jam session, I had received a card directing me to The Hat Bar for nightly jam sessions. I found my way there and realized that the Bar was actually built on the model of hosting jam sessions on a nightly basis – no music fee for the customers, attraction for the musicians and their friends to join, plenty of drinking – very clever! I still have to make up my mind what I think of it in terms of economical issues for musicians and musical quality. It was a fun time though getting to play quite a bit and getting to know more Berlin musicians. The city is a breeding ground for outstanding music and culture but the price of living is still quite affordable. Many of the musicians had actually immigrated from the States – the new New York scene?

Off to London – I’m leaving on a jet plane, specifically Ryan Air, which I’m only moderately impressed with so far – very crowded, a website that was down for days, lots of restrictions on luggage and check-in – fingers crossed for arrival soon in London!