We discussed the different types of licenses in my Music Industry course the other day and realized that it can be a burden for a small venue to be liable for the performance rights licenses through ASCAP and BMI and SESAC when resources are already limited. On the other hand of course, such monthly payments are supposed to ensure that songwriters get paid for their work  and performances of their music. At the end of class I overheard a conversation between some of the students. They discussed how venues might get around such burden by having performers play all their original music instead of any covers. As they considered the option, they admitted that it’s hard to listen to all original music and how the level of excitement rises once they hear a familiar melody. That made me think about the importance of programming the right mix of novelty and familiarity in order to communicate with an audience. This has nothing to do with selling out, but with shaping a story and providing a point of departure for the audience to follow the thought process and the creative development of the music. I actually really enjoy taking familiar songs and giving them a jazz and personal twist. The trick is to find a unique approach while keeping the concept and the meaning of the song intact. I have heard successful and unsuccessful attempts of reimagining a piece of music. One unsuccessful attempt is Brittney Spears covering the Rolling Stones “Satisfation”.

The Rock’n Roll revolution and revolutionary attitude is lost to a bubblegum sex expression. And musically nothing has been added – the rocking guitars were transformed into predictable  pop soundtracks. 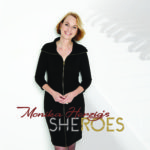 When I take a familiar song and melody to be transformed into my jazz world, I’m very careful about formulating a concept. Let me walk you through the example of “Ain’t No Mountain High Enough”, which is one of the selections of the upcoming album SHEroes on Whaling City Sounds. The song was created by the hit writing team Ashford & Simpson. The most popular version was a 1967 duet version with Tammi Terrell and Marvin Gaye. More faithful than the innocent love affair concept was the interpretation by Diana Ross & The Supremes with the Temptations in 1968. I approached the song as an anthem of empowerment – the idea that no mountain is high enough to conquer. Of course, that’s the concept of our group SHEroes – despite all hurdles and barriers, women will succeed in raising their voices and finding an equal space in society. Hence, I experimented with upbeat, contemporary rhythms as the basic layer. Of course, for a jazz version it’s always important to express the colorful harmonic language as well as meaning. In my case the meaning is an anthem for empowerment, a call to action for overcoming any barriers. Hence, the call to action was the most important ingredient and had to be repeated in order to get results. I extracted the hook line and laid it repeatedly over a bed of funk grooves. In order to be true to the original song, I included the verse keeping the melody intact with some harmonic alterations. As I developed the framework I had my doubts that the two segments would be substantial enough for a meaningful unit. That’s where the importance of a working band comes in. An idea can be developed through experimentation and feedback. We performed the arrangement throughout a two-week tour and adapted to the performers by providing a modal framework for Leni’s guitar solo and a space for Jennifer’s bass artistry. Of course, for drummer Rosa Avila with her high level of energy, the piano groove was the ideal medium to showcase her talents.

After the recording was secured, Rosa and Leni met Teri Lynne Carrington on one of Leni’s shows at Bar 55 in New York and passed on the music. It turns out that Teri is a good friend of Valerie Simpson, hence she passed on the track. Imagine my surprise as one day in my mailbox an email by Valerie Simpson appears. She let me know that she received the track and was pleasantly surprised – here is her note:

Terri is very good about keeping me in touch with musical

things she thinks I might like—but this was an unexpected
treat!   Didn’t expect to hear this treatment of my own song.
So nice to be able to honestly say I really really liked it!
The fact that it’s an all ladies band was an added plus and I
can appreciate the groove you found to put the chorus over.
Wishing you the best with the new album……
Regards,
Valerie

It was the happiest day of my life – hope you hear the meaning and the call to action when you listen to this special track from our new recording SHEroes!!