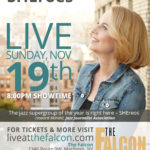 The story behind the song and especially the SHEroes arrangement to be released March 23, Whaling City Sound – sneak preview:

This Nick Ashford/ Valerie Simpson collaboration was written in 1966 – we recorded it October 2016 for its 50th anniversary. In 1967 it became a hit with the duet version of Marvin Gaye and Tammi Terrell,  in 1970 Diana Ross did another successful take and received a Grammy nomination. The Ashford/ Simpson duo wrote the song prior to their Motown collaboration and it became their ticket into the company. 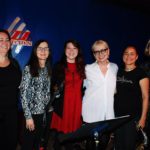 Of course it is a love song about crossing any possible barriers to be with your lover. When I was thinking about repertoire for our recording it came to my mind though as an anthem written by a woman for being fearless no matter what hurdles come your way. Of course, that’s the mantra for our group SHEroes. Hence I started experimenting with options to make this a contemporary jazz instrumental. I wanted to keep the funky flavor but add modern harmonies and emphasize the message – Ain’t No Mountain High Enough. I broke up the form into the hook and the verse and used our unique instrumentation of flute and trombone to harmonize the melody in intervals of a fourth. And of course the fabulous Leni Stern found the right guitar colors and grooves to turn it into a big jam. 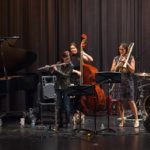 We experimented with the arrangement during our 2016 Fall Tour and when we got to the studio, I was delighted to discover a Fender Rhodes in excellent shape. Another twist to the recording was our decision to give the solo to the bass. There are many jokes about bass solos since this is usually the part where everyone drops out, things get quiet, and people start talking. Not though when Jennifer speaks up – she takes command of the section and takes off with her Cello trained chops, pay attention!

And here is what the composer herself said about the arrangement:

Didn’t expect to hear this treatment of my own song.
So nice to be able to honestly say I really really liked it!
The fact that it’s an all ladies band was an added plus and I
can appreciate the groove you found to put the chorus over.
Wishing you the best with the new album……

This is a great example for what got me fascinated and hooked on jazz – take a familiar piece and adapt it to the moment, to a new and personal message, work from the familiar to the unknown, creativity at its best. 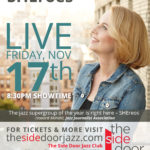 We’re getting ready for a few performances: November 17 at the Side Door in Lyme, CT and November 19, Live at the Falcon, Marlboro, NY – please join us if you’re in the area and enjoy this glimpse into our new release – Ain’t No Mountain High Enough!