If you considered replying affirmative to this question you are in line with the majority of the population. A recent series of four experiments conducted by a group of researchers at Duke University with results published through Psychological Science OnlineFirst reveals a gender bias towards attributes of creativity perceived as male and judgment of creative capacity generally being higher for males. Initially, the researchers determined relationships of stereotypical male vs female traits with perceived traits of creativity and found strong correlations with stereotypical male attributes such as decisive, competitive, self-reliant, willing to take risks, ambitious, daring, adventurous, and courageous. Throughout several experiments they compared ratings of creativity for a variety of professions and executives by controlling for products but switching male and female names. And of course, females were consistently evaluated as less creative.

This might be another key element why participation of females in executive and creative jobs seems to have hit a glass ceiling. As long as there is a perception of less quality and capability, barriers will remain and prevent equal access. Similarly, participation of female jazz instrumentalists in the art form seems to stagnate beyond the High School level. According to these experiments, perceptual discrimination remains and the recent request for blind auditions by the group Jazz Women and Girls Advocates is moving into the right direction. 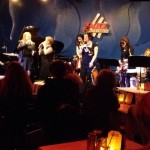 Of course, these perceptions actually have a two-way effect of initially less expectations being met by diminished performance quality due to the psychological pressure. How do we overcome this Catch 22 effect? It will take a conscious effort from all of us! Just recently I experienced a vicious attack towards my credentials and ability – it is very difficult to pick up the pieces and continue. Take action, encourage a young girl tomorrow to pick up the trombone, praise your female colleague’s creativity, invite a fellow female musician for a performance, and think twice before you judge anyone.