tly I was honored to be part of a recording project led by German cellist Manuel Fischer-Dieskau entitled David Baker: Singers of Songs released on MDG Records. I got to record the Suite for Cello and Jazz Trio and also write the liner notes for the complete recording which also includes Singers of Songs, Weavers of Dreams for cello and percussion as well as the Sonata for Cello and Piano. Here is detailed info about the whole project. 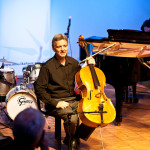 Last October we performed a series of concerts in Germany entitled “From Bach to Baker”. Manuel exemplified how Bach certainly was an improviser and in today’s world probably would have been a jazz musician thus creating a lineage to the Baker pieces. I also added a few jazz selections by Indiana composers to the program and helped curate. It was great fun and Manuel decided to come to Bloomington this September and present the program as well as visit his mentors and the campus where he completed an Artist Diploma nearly 30 years ago. He will arrive on Friday, September 18 and we have a very exciting series of events planned. Don’t miss the opportunity to hear David Baker’s wonderful music and the artistry of Manuel Fischer-Dieskau – one of the world’s leading performers on cello, Professor of Music in Mainz, and of course the youngest son of the German Lieder

king Dietrich Fischer-Dieskau. Joining us on bass is Jeremy Allen and on drums Josh Roberts.

Here are the events open and free to the public:

Manuel Fischer-Dieskau (MFD), born in Berlin in 1963, was a student of Wolfgang Boettcher (Berlin), Janos Starker (Bloomiongton, USA), Arto Noras (Helsinki) and William Pleeth (London). MFD’s carrer as a musician has so far covered all the fields of concert activity:

During his years as the cellist with the world-renowned Cherubini-Quartet, MFD concertized on all the major concert stages in Europe, Asia and the USA, participated in numerous CD productions for EMI-classics, and during 1989 and 1995 mastered the major works of the string quartet literature from the classical era to to the modern period.

As a chamber musician he has regularly performed with leading artists such as Viktoria Mullova, Sabine Meyer, Paul Meyer, Christian Zacharias, Katja & Marielle Labèque, Isabell Faust, and many others more. MFD has performed as a guest of many international festivals and taught masterclasses all over Europe. In 2007 he was appointed to the post of Professor for Violoncello and Chambermusic at the Hochschule für Musik at Johannes Gutenberg University in Mainz.

Since 2010 MFD plays regularly in a duo with the Canadian pianist Connie Shih. Their first joint CD featuring the complete sonatas of Carl Reinecke was released on MDG records in 2011 and received the highest praise in the international press. In 2014 MFD released his second solo album on MDG, „Singers of Songs“, with celloworks by the US-american composer David Baker. Beginning with the 2014/2015 season MFD became the artistic director of the „Amici dell’Arte“ concert series in Wiesbaden.