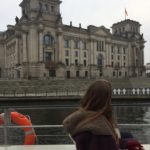 We just returned from a week in Berlin attending a conference, performing two 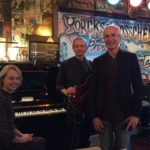 concerts, and other lectures and activities. This is the third time over the course of one year that I ended up in Berlin – a concert and workshop last July at the IU Gateway Office, a week working on creativity and jam session research in October and this past week. Even though I grew up in Germany, I had been to Berlin only once before – in 1985. Yes, that was before the wall came down and we had to travel there on a highway that was enclosed by barbed wire and were forced to exchange a certain amount of money into DDR currency for a day visit to East Berlin. The city has transformed from a symbol of division and restrictions on freedom to a symbol of 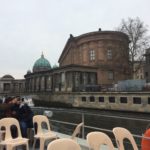 opportunity, growth, and entrepreneurship. Over 30% of new start-up companies in 2015 were based in Berlin, followed by Munich with 11% and as a visitor the amount of construction of new buildings and infrastructure seems quite extraordinary.

We did a boat tour on the Spree, the river that flows through Berlin, and also visited the Museum of Technology. As I was taking in Berlin’s history, I started thinking about our current times where walls are being built instead of torn down. The effect of power struggles has left its traces all over the city. The palace of tears is a glass building where for 30 years families that were torn apart by the war would meet and visit for a limited period of time and then leave again in tears. The public swimming pool next to the Spree was built where 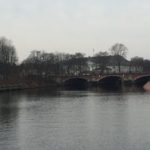 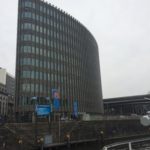 the old palace of the kings of Hohenzollern used to be. The Russian occupants decided to destroy the castle completely after the war in an effort to get rid of all symbolism of previous German aristocracy. The architecture of the city is full of contrasts – next to historic buildings are futuristic glass designs and construction sites. Reunification has released an abundance of creativity, new ideas, and optimism that has transformed the city into the center of entrepreneurship and cultural advancement of Europe.

The American Dream is based on tearing down walls and injustice. Ideas blossomed in an open society willing to share and to take risks. But unfortunately, the current political climate is pushing in the opposite direction. Walls are supposed to go up, the value of science and culture is ignored, and collaboration and economic exchange is discouraged. I have seen the results through the barbed wire, in the palace of tears, deprived economics in East Germany, and my mother has shared her stories of poverty and lack of opportunities as an orphan in the destroyed city of Munich after a senseless war caused by a power-hungry maniac. Hopefully those images are in the past but nevertheless especially the history of Berlin symbolizes the effects of freedom and collaboration versus closed borders and extreme nationalism. 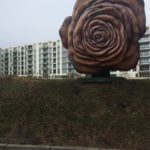 Finally, the day after our return I joined the fantastic teaching artist Cathy Morris for two presentations at an Elementary School in Southern Indiana. The kids learned about violins, the elements of music, listening, improvising, creating music and getting inspired and they were in awe and started their Spring Break happy and with a vision for their future. The principal of the school introduced the shows and thanked the Indiana Arts Commission for the grant support to make these and other performances possible through funds distributed by the NEA. While I was looking at the happy, excited faces of the kids whose lives were just touched and changed, I wondered how many of their parents voted for the current president who just submitted a budget proposal that eliminates the NEA, which means they would not have any more artistic convocations at their schools. I also wondered if these parents knew that they are responsible for downsizing their children’s education to a system geared to about 10% of their brain capacity. Should someone tell them?

Just some food for thought. Please continue to raise your voices for the sake of our children and our future. And of course, this is just my humble opinion that may be proven wrong any time with good arguments and solid facts.