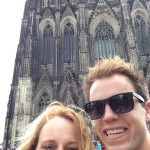 Sister Cities International is a non-profit organization now in its 60th year with relations created all over the world between cities and their organizations. The exchange takes place on all levels from governing groups to professional units to cultural organizations. On Monday, June 27 we arrived in Cologne after a 5-hour ride on the Autobahn to represent the city of Indianapolis and share about the rich jazz legacy of Indiana with the sister city population.Sister Cities International was created at President Eisenhower’s 1956 White House conference on citizen diplomacy.  Eisenhower envisioned an organization that could be the hub of peace and prosperity by creating bonds between people from different cities around the world.  By forming these relationships, President Eisenhower reasoned that people of different cultures could celebrate and appreciate their differences and build partnerships that would lessen the chance of new conflicts. 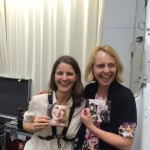 We stayed at the hotel Allegro (what a cool place for musicians) in the center of Cologne and our first outing was to the University of Cologne. The head of the department, Dr. Dieter Manderscheid, took the time for a meeting and shared his recent curriculum revisions for the jazz program and his vision for the future. His leadership is evident through the thriving program – most importantly he eliminated the distinction between pedagogy and performing majors – a modern career includes both.

Later we had dinner with the committee members and several visitors from Indianapolis who are in the process of creating further school exchanges. The next morning we observed the WDR Big Band in rehearsal with Danilo Perez. Some of the world’s best jazz musicians are employed full time for this radio band to create programs and recordings for the radio station – what an incredible job. Everyone was extremely gracious about welcoming us and letting us experience their interaction and initial recordings. Josh even got to play the drum set and Karoline Strassmeyer exchanged CDs with me. 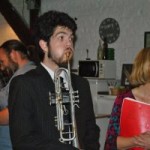 Our first concert event was at the Loft together with Andre Nendza’s students from the Jazz House school. The Amerika Haus helped us spread the word and the room filled up to a standing room only crowd. Andre’s group played a set of original compositions with inventive approaches. Then we did our tribute to Indiana Jazz with a final jam of everyone together. The evening was recorded – hopefully we’ll be able to share the recordings soon.

On Wednesday we were treated with a tour of Cologne starting with the famous Dome. It took many centuries to complete the building and thanks to the foresight of the citizens of Cologne most of the glass windows were saved during the Second World War by hiding them in the country before much of the city was destroyed by bombs. 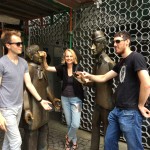 The highlight of our visit was the evening concert in the city hall of Portz. The event was an experiment for the committee – the venue doesn’t usually host jazz concerts and the community is a bit outside of Cologne. But to everyone’s pleasant surprise the room filled up quickly by 6pm and the audience feedback to our stories and music was absolutely inspiring. In fact, we felt like rock stars when we walked into the restaurant later for dinner and everyone greeted us with applause. I can’t express my gratitude enough to the Sister City Committees of Indianapolis and Cologne, the Indiana German Heritage Society, the Amerika Haus, and our private crowdfunding supporters who made this exchange possible and changed the life of the young musicians and the audiences alike. Go here to relive the whole experience and ready about it!

Also – here are some picture impressions from our stop at the IU Gateway Office in Berlin: 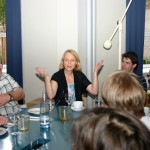 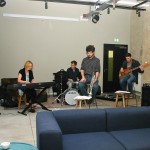 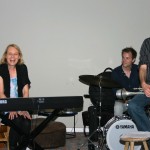 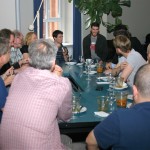