I have to confess, I’m a total Chick Corea nerd.  Spain was one of the first jazz tunes that I learned and when I realized that we have a birthday in common, I was hooked. For my undergraduate thesis, I decided to analyze the piano styles of Art Tatum, Thelonious Monk, and Chick Corea.  The first Elektric Band Album was released at that time and I got to hear the Akoustic Band with Dave Weckl and John Patitucci in 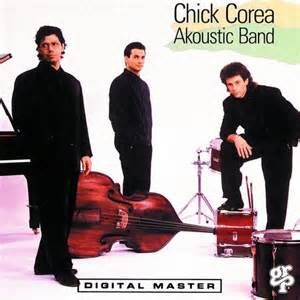 Tuebingen/ Germany.  After the concert, Chick was sitting all by himself on stage tinkering at the piano.  I joined him with my Sony Walkman and told him about the thesis and he showed me all the things that he picked up from Thelonious Monk and Art Tatum.  Everyone had left and we just hung out and chatted. Of course, when I got home I realized that my Sony Walkman had decided to not function that evening – nevertheless I have my own great memories. About 10 years later, I was a doctoral student at Indiana University working on my dissertation on jazz piano pedagogy.  I went to the IAJE convention in Atlanta and accompanied my friend Oliver Nelson jr during a jazz flute clinic.  In the evening, I walked by the hotel restaurant and there were Chick Corea and Herbie Hancock having dinner together.  Oliver still makes fun of me, because I just froze and stood there and stared like a teenage groupie. He keeps telling me that when he returned after 20 minutes and saw me still standing there he felt sorry and took me over to introduce us.  Oliver’s dad had worked with both of them extensively and Chick and Herbie were glad to reconnect. Over the years, I bought every new album and book that Chick put out and learned many of his tunes and solos. Something about the musical style and philosophy just deeply connected with me. I also got to see a variety of concerts with the

second incarnation of the Elektric Band in Indianapolis, the Acoustic Trio at another IAJE convention, with Bobby McFerrin and Jack DeJohnette at Clowes Hall, with Bela Fleck at Indy Jazzfest, and my favorite – with Lenny White and Stanley Clarke at the Blue Note Jazz Club in Tokyo. I happened to be in Tokyo on tour and saw the announcement and decided to find my way there, which wasn’t easy. But I managed to get in and I have to confess, I have a bootleg recording of the whole concert – Last year, I finally got to share my fandom during a pre-talk for a duo concert with Gary Burton at Carmel’s Palladium. And here is the most exciting news: I signed a contract with Rowland & Littlefield Publishers to add a book to their Listener’s Companion series on Chick Corea.  So my adventure has begun and I’m now a supernerd, collecting all interviews and information that I can get.  In order to share the process and keep me motivated, I started a facebook group – please join here if you’re interested.  I’m hoping to post frequent updates and get others to share their memories, information, transcriptions and more.  Unfortunately the days of sitting on the stage after the concert and chatting are over – Chick is very busy and in demand, but I’m collecting info from any collaborators and friends! Projected release date is Spring 2017 – come along on the adventure –