I’m honored to help present “Singers of Songs” – Cello works by David Baker as recorded by cellist Manuel Fischer-Dieskau on MDG Records during a concert series in Germany from October 12 – 18.  The CD was released earlier this year and I got to contribute the piano part to the Suite for Cello and Jazz Trio as well as the liner notes. The music is an interesting mix of classical and jazz elements and Manuel’s cello playing is simply beautiful.  And even more special was to listen to David’s stories about writing the music for cello virtuoso Janos Starker who initially brushed it off as easy fare until he realized the demands and the quality of the compositions. 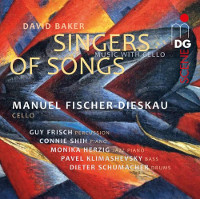 For the tour, we will present a mix of the recorded pieces as well as Manuel’s solo cello arrangements of Bach works and a mix of jazz pieces.  Here are the details: