Have I Done My Homework?

Misconception, prejudice, ignorance, or just misunderstanding – what do you think? Here is the story: Grants are a wonderful way of making projects and ideas reality. They can come from governments or foundations and are usually awarded for proposals that best match the purpose of the grant program and are presented in a professional and financially sound write-up. Over the years, I have received numerous grants that helped make a wide variety of projects possible – here are just a few examples:
– the release of the first Acoustic Project Album- the development of Puppets & All That Jazz

– several years of Jazz in the Schools programs

– Nature Songs & All That Jazz

– Indiana Jazz Masters in the Schools

– restoring and mastering the music for David Baker

– A Legacy in Music- developing courses in Entrepreneurship, Creativity, Music Industry, and Programming

– Indiana in Music and Words

The process of writing grant proposals is time-consuming and of course at least as often as proposals get accepted they also get rejected. Reasons may vary – the concept might not be the best match, the proposal had flaws, or there are simply too many applicants.  Each rejection is a great opportunity to learn as panel reviews and comments are usually available for feedback and provide insights in how a proposal is perceived and can be improved. When I receive one of the rejection letters, I do take advantage of the feedback opportunities and integrate helpful tips in improving the projects.

Last week I received one of the rejection letters and immediately proceeded to listen to the recording of the review panel discussion in order to understand why ratings were not high enough. This proposal was a request for support to bring the performers on “The Whole World in Her Hands” to Indiana for a series of concerts and workshops. The project features some of the world’s leading female jazz instrumentalists who happen to mostly live in New York, as work and network opportunities in jazz are still at the highest level there. The involvement of female instrumentalists in jazz is still extremely low and the goals of the project are to provide role models and mentors for students as well as increase audience awareness about current successful artists and the issues involved. These needs have been documented in several recent dissertations on the subject by Natalie Boeyink and Ariel Alexander. Visit www.monikaherzigmusic.com for lots more info and samples.

As I listened to the review panel, I realized that the issue with this specific request was certainly not the content as comments repeatedly pointed towards the far advanced level of the artistic samples provided. The panel of three women and one man had problems understanding why this project was needed and why the highest quality of performers was crucial to making an impact. One 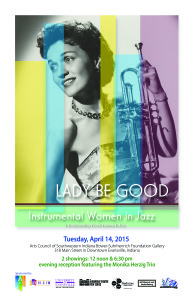 reviewer thought I was mainly the promoter and booking agent for the project not realizing that I was the musical director, pianist, and main composer. My lesson here is to state that more clearly in future proposals, but the misunderstanding also tells me that the idea of the artist as entrepreneur is still developing. Starting a business has a traditionally defined process with hatching an idea for a product, creating a business plan, getting investors, creating the product and distributing/ promoting it to potential customers. The creator is involved in every step and develops the business plan. Creating an artist career is very similar to starting a business – artistic products need to find audiences and distributors. But the role of the artist is usually perceived as separate from the business needs and in conflict with the planning and distribution process. That means though turning the most important career decisions over to someone else who is most likely not as familiar with the needs and qualities of the artistic endeavor. Of course, it’ll be important to enlist a team of specialists who can execute specific needs, but everything needs a conductor and nobody knows their symphony better than the composer him-herself. 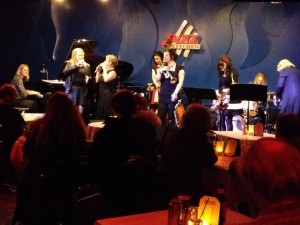 Here is my most puzzling and eye-opening reviewer comment though: Most likely not by coincidence the person who voiced concerns was the only male panelist. He wondered why I would be searching out performers beyond Indiana and the basic need of such a project. In a nutshell, he stated that I just didn’t do my homework and there are plenty of performers readily available in Indiana and the concept of nurturing female jazz instrumentalists is not pressing enough to be supported. When one of the female reviewers sheepishly added that she had colleagues at Interlochen who had confirmed the extreme gender imbalance in the jazz world, the panel hurried quickly to the next proposal. I have been presenting concerts featuring Indiana jazz women for over 10 years, I started a summer songwriting camp for girls and even an organization in support of Women in Music and the unfortunate reality is that there are about a handful of female jazz instrumentalists in the State that perform at a professional level, not necessarily  the right instrument combination to form a complete band. According to the research, the proven way to initiate change is providing role models of the highest quality and opportunities to interact with mentors. I have certainly done my homework and sought out as many local performers as I was aware of, showcased them in various events, provided learning opportunities – but obviously an underlying issue is that it is not perceived as an issue – incidentally the panel was brainstorming for a minute on Indiana performers that should be included in such a pro

So – what is your take, misconception, prejudice, or just misunderstanding? And my task now is to look for alternate sources of financial support because as the reviewers stated themselves – it’s a monumental project on a very large scale – exactly what’s needed to make a difference!