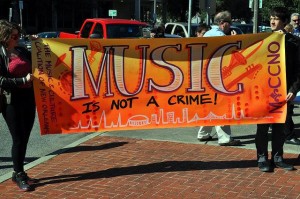 Last week I attended the Future of Music Coalition Summit and witnessed a variety of discussions on the current state and initiatives in the music industry.  There are many issues on the table in this quickly changing landscape of new technology and distribution such as shrinking income streams due to streaming, net neutrality, and royalty rates.  But the discussion that left the deepest impression on me was a presentation by several delegates from the Music and Culture Coalition in New Orleans about a new zoning initiative by the city limiting the noise level of live music and banning street musicians.  After Katrina destroyed large parts of the city, survivors had to relocate and rebuild lives elsewhere.  Most did not return as they had nothing to return to, hence a new population attracted by New Orleans’ prior charm and with sufficient financial backing decided to build new homes.  New Orleans is traditionally associated with a live music scene that is vibrant and unique and has become its identity and main tourist attraction – jazz is not just a style of music, it’s a lifestyle.  It turns out though that the post-Katrina population does not understand this unique connection and now is turning against the very essence of the city, live music.  A new noise ordinance is supposed to limit live music to a certain volume level and keep it off the streets after 10pm.  Bar owners in the French Quarter have to apply for special permits in order to present any live music.  The traditional brass bands, the trademark of New Orleans parades and parties, are not allowed to perform on the streets anymore and in fact often face arrest and charges.  Several new  residents have initiated law suits against bar owners and musicians, claiming that live music is damaging their quality of life.  Are the current governing body and wealthy new residents actually that short-sighted that they don’t realize that cutting off live music in New Orleans is killing the very essence of the city’s tourist attraction and in return everyone’s main income source? The Music and Culture Coalition of New Orleans has a facebook site with much more detailed info  here – their motto is “Music is not a crime”.  Listening to the passionate speakers in their battle against cultural blindness and bureaucracy, my vision of America’s cultural future became a deserted landscape of unified living quarters and dying trees with a graveyard of unidentified musicians and artists.  Just when cities everywhere started to latch on to the idea of the economic impact of the arts, the city that is the essence of arts economics is turning its back on music – seems like a nightmare, someone please squeeze me and make me wake up!