Greetings from Siena, Italy where I spent the last three days convening with researchers from all over the world – Sydney to New Orleans, Helsinki to Capetown and everything in between – discussing, presenting, and listening to presentations on music festivals. It’s been fascinating and 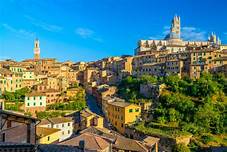 inspirational to consider so many different perspectives on the idea of festivals and here is my summary, some of the central discussion points, and some food for thought for presenters, musicians, audiences, and organizations.

The conference was part of a larger initiative called CHIME, Cultural Heritage and Improvised Music in European Festivals, a collaboration between the University in Amsterdam, University of Gothenburg, University of Sheffield, University of East Anglia, and Birmingham City University. Here is Professor McKay talking about the various projects and publications over the past three years. Among them is an in-depth analysis of the impact of jazz festivals not only economically but also on the identity and heritage of communities – read the complete article here. Of course there are always limitations to extrapolating results from a limited number of case studies. Nevertheless – tendencies are clear – and something that I find curious is for example that the Edinburgh Jazz and Blues Festival in Scotland draws three times the audience size as the Monterey Jazz Festival ( 75,000 vs 25,000). The economic impact of the number of people visiting and spending their money is obvious – Edinburgh has become a festival center. Far beyond the economic impact though, festivals can create a sense of community, spirituality, heritage, and place-making. They may be creative hubs for new developments and grooming new audiences. Partially due to all these advantages we currently experience an era of festivalization.

Organizations and communities come up with every new and creative ways for staging a festival – hoping it’s unique and special enough to attract audiences. Much more detailed information can be found in the article linked earlier which also features an annotated bibliography on the subject – I’d like to share some of my personal thoughts and impressions from this specific conference.

Some of the case studies of various festivals around the world featured some fascinating presenting approaches that were new to me. For example there is the Zome Jazz Fiets Tour – for one day in August thousands of tourists travel thousands of miles to Groningen in the Reitdiep valley, the northern end of the Netherlands – an area virtually unchanged since the Middle Ages. The basic requirement – bring a bicycle, as it is the only means of transportation between the concerts staged in medieval churches and farmer’s barns – rain or shine. Marline Wilders from the University of Groningen reported on her observations and interview results from the festival where participants reported the special experience of getting their brains cleared while cycling for miles between the events, often in rain, and the impact of the history-laden venues on the concert experience. I have to admit – I would LOVE to experience this in either capacity, as a performer or a cycling audience member.

Another fascinating report documented a festival in the Republic of Congo, where actually the festival tradition of connecting with nature and spirits through masks and dancing has been commercialized over the years and somewhat have lost their meaning – a possibly common result of festivalization. A researcher from Capetown reported on the challenges of an extremely challenged economy in a city that has the highest crime rate in the world and the quest of fostering community through festivals and events. While for example the Capetown Jazz

Festival is an internationally recognized festival with a considerable amount of tourism, it reinforces the division between races and economic status as the underprivileged population does not have the means and access to attend. On the other hand, events that foster community need to feature artist and art from inside the community, not always attractive for tourism.

Finally, colleagues from New Orleans documented the overwhelming relationship of the New Orleans festival with memorials in form of statues, memorabilia, merchandise, tributes, tribute stages, announcements, sites – the presentation was truly mind-boggling. Should we be concerned with such a fascination of the past, is it part of the heritage, does that impact the art form? Some fascinating questions to look at and discuss.

My presentation focused on the Lotus Festival and how it has transformed the Bloomington community not only in terms of being a tourist destination but also in terms of strengthening community and rebranding spaces. Suni Fass, now the Executive Director of the Lotus Festival, investigated the relationship of spaces and music/ audiences in her dissertation especially the unique use of churches during the festival.

Spaces influence the way music is played, music is perceived, and audiences interact with the music in a fascinating way. The same set performed in a tent vs a church sanctuary will sound differently, will have an attentive vs transient audience, and will be remembered in different ways. Similarly, Vanessa Todd presented at the conference on a festival held in the shells of a Cistercian Abbey in South Wales. At this sacred site audiences connect with the past through the sounds of contemporary music and poetry.

Of course, there is the question when an event becomes a festival and vice versa. Gina Arnold from Evergreen State University in Olympia, Washington – reported on the gatherings that produced the grunge and Riot Grrrl movements with the explosion of Nirvana and the founding of the Sup Pop label. Was it a festival or a spontaneous gathering? It sure was the beginning of a new movement and era.

Most profoundly though, George McKay, one of the leaders of the CHIME collaboration, brought Martin Luther King’s address at the 1964 Berlin Jazz Festival to our attention.

Jazz speaks for life. The Blues tell the story of life’s difficulties, and if you think for a moment, you will realize that they take the hardest realities of life and put them into music, only to come out with some new hope or sense of triumph. This is triumphant music. Modern jazz has continued in this tradition, singing the songs of a more complicated urban existence. When life itself offers no order and meaning, the musician creates an order and meaning from the sounds of the earth which flow through his instrument. 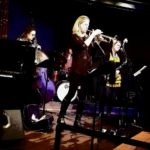 Many questions arise from this gathering – are festivals still meaningful or have they become commercial vehicles for large corporations such as Live Nation, i.e. London’s Lovebox? How do festivals change the music, audiences, heritage, communities, economy – advantages vs disadvantages? But most of all – I’m curious about the musician’s perspective. Very little research has focused on this angle – how do festival spaces change the musical choices and performance practice, interaction with the audience, what effect does the transient nature have on audience interaction, economic realities, intimacy?  From my perspective – I love playing festival sets but they are certainly different than sets I would program in a club or theater environment. It is very difficult to play slow, beautiful selections in an open space where sound fades into the skies and audiences will walk to the next stage once the beat slows down. The sound bleeding from other stages also causes interruptions as well as the need to move on and off the stage in lightning speed without appropriate sound check time and the option to interact with the audience after the set. On the other hand, festivals are fantastic opportunities to interact with colleagues and get to enjoy their music and overall a uniquely positive, happy environment that builds community! Please do send me your thoughts and feedback to mherzig at indiana.edu!!! Incidentally – some festival sets of ours to be found here, there is eating and more….