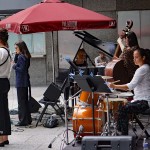 I just returned from a two-day outing to New York City celebrating the release of The Whole World in Her Hands. Twenty years ago we made a conscious decision turning down a full-time job offer for a church organist position at a 3,000+ member Catholic church on Long Island. It could have been our ticket to the most vibrant jazz scene in the world or it could have prevented us from pursuing our original music and projects. We will never find out except if crossing into a parallel universe finally becomes reality, until then we can only imagine. It was a difficult decision at the time – I had just finished my Doctorate at Indiana University

and was out of school for the first time in my life. Our jazz fusion group BeebleBrox was doing very well with many festival performances, international tours, and several recordings on the market. Two years earlier we had bought a house in Bloomington and my father had just passed away. I had three major career options in mind – full-time touring musician, church musician with gigging on the side, and music professor with support for creative activities. Of course the full-time musician career was something we were already doing for nearly a decade. We had a good taste of playing about 10 gigs a week, driving all weekend, running our own record label, and never knowing what the next month will bring. Just two years earlier I had put my Catholic Church Organ 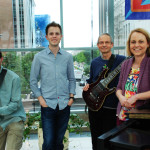 Certificate from Germany to good use by taking on a part-time organ job. And of course, with a brand-new Doctorate on my resume I was ready to tackle academia. Many of our friends had left to New York to pursue their jazz careers – some were holding out starting to gain traction with some major acts, but most had returned to their points of departure – frustrated, disillusioned, and broke. Their stories were heart-breaking: they had used up all their saving to live  in sub-human conditions, running around at jam sessions and non-paid gigs, often actually performing with some amazing musicians, but ultimately losing  out to costs of living in the city and the psychological drain of competition and low quality of living. It was a very difficult decision to make and we spent many hours discussing the pros and cons. Well, obviously our decision was to turn down the job and stay in Bloomington. The main decision factor was the quality of living – we were getting ready to start a family and Long Island didn’t seem to be the ideal environment for this next stage of our lives. I don’t regret our path and our journey with our two wonderful teenagers has been exciting and rewarding. The career path became a combination of academia and professional musician, very rewarding! I was honored to become a full-time faculty member in Arts Administration at Indiana University, one of the world’s leading educational institutions, teaching about my experiences in the business of music. And of course, my performing 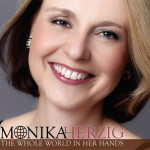 and recording schedule are extremely active – don’t miss the June 10 release of The Whole World in Her Hands, here is the order link – teaching and performing are essential to the mix! What’s the moral to this contemplation? The world has become a much smaller unit accessible from any point of entrance through the internet and easy ways of travel. In this truly global community we are not confined anymore to the barriers of locality – let’s open our minds and hearts to the values of talent, individuality, creative product to anywhere in the world. The nurturing community of Indiana Avenue early in the 20th Century, producing a host of jazz greats including Wes Montgomery, Freddie Hubbard, J.J. Johnson, David Baker, Slide Hampton, James Spalding and many more is living testimony. And yes, we’ll bring the sounds of The Whole World in Her Hands to many localities during our September Tour – stay tuned and make sure to order your copy!

Addendum: Yes, I’ll be back to New York City in September –  because as Frank Sinatra mentioned – New York, New York!