Teaneck Sound and Pasta – In Her Hands! 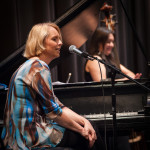 After nearly two weeks of touring, The Whole World in Her Hands band was

ready to enter the recording studio last Monday for three days of creating magic. Making a new album is exciting, demanding, nerve-wrecking, expensive – a grand adventure. I had prepared a repertoire of 12 tunes – a variety of originals and arrangements – and scheduled special guests and one of the best engineers over the past year. Here is the account of those three days at Teaneck Sound Studio – I can’t wait to share the results! 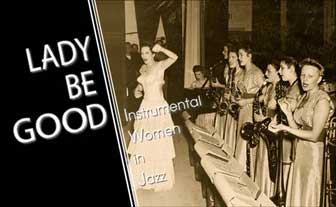 And I’m extremely grateful to documentary film maker Kay D. Ray for capturing our time in the studio and the reflections of all the musicians involved. Kay recently released “Lady Be Good” featuring many of the all-female Big Bands during the Second World War with fascinating footage and interviews. Her next project will be a documentary on this project! 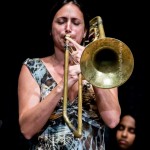 experience to get the ideal sound from each instrument by specific placement of microphones. We brought in a large ensemble with Jamie Baum on flute, Reut Regev on trombone, Ingrid Jensen on trumpet, myself on piano, Jennifer Vincent on bass, Rosa Avila on drums. Ideally each instrument needs to be sound isolated in order to allow proper mixing and possible fixing of mistakes. After several hours of adjusting mics and levels we were ready to run the first tune. I had chosen my Portrait of Nancy Wilson, a composition based on her birth date, as a feature for Ingrid Jensen’s beautiful trumpet artistry. Our second tune was my tribute to our treasured jazz legend David Baker who we recently lost. One of 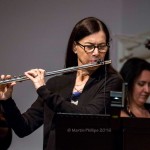 his trademarks was to mix triple and duple meter as heard on the recording of Kentucky Oysters and this tribute tune features alternating meter sections. The tune has challenging segments and took multiple takes to find the best interpretation. By 10pm we had one tune left – Jamie Baum’s Wayning, a tribute to Wayne Shorter. What a coincidence that all three selections that day were tributes to our heroes! Everyone was tired after 7 hours in the studio, but we all wanted to reach our goal and capture Ingrid Jensen’s trumpet magic as much as we could. Three focused efforts produced the needed results – a powerful and swinging version of Wayning. By 11pm everyone left tired but proud of our achievements and excited about the beautiful music in the making. 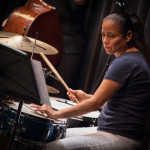 On Tuesday, we gathered back at Teaneck Sound at 3pm. Our special guests for the day were Mayra Casales on percussion and Leni Stern on guitar. We had a lofty goal of four tunes to be recorded – and those four were the most complex ones. As a tribute to our band concept of breaking down barriers I had created a funk version of the classic “Ain’t No Mountain High Enough”. Even though we had performed it during our tour, we needed to integrate the new element of percussion and adapt some of the harmonies and solo sections which took a bit longer than expected. The next tune was a samba version of “House of the Rising Sun” in Santana fashion. The arrangement is challenging and morphing a well-known classic into a new piece is not always a given. With everyone’s help and some intense discussions we finally found what we needed – but time had slipped away. Leni had to leave to 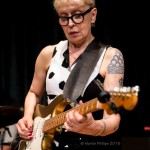 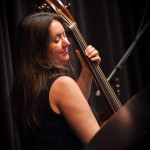 her regular gig at Bar 55, so we decided to record only one more tune which was Jennifer’s composition C.C. Throughout our tour, Jennifer told audiences the story of her tune which is dedicated to a conflicted individual engaged in shady business but nevertheless becoming a dear friend to her who was stabbed to death. Similarly, the piece represents the loyalty and struggles through contrapuntal lines and rhythmic layering as well as free and desperate soloing. Recording the piece was a deep and touching experience.

For our last day, we started late morning with the goal of recording five more pieces. For the first two I had invited alto saxophonist Gabrielle Murphy, who came highly recommended as a wonderful young player. I wanted to feature her on my arrangement of “This Little Light of Mine”, which was initially recorded for the Peace on Earth CD. The piece reflects our concept of providing role models for aspiring female instrumentalists and its simplicity provides a wonderful creative vehicle. By the time we had warmed up to each other and found our groove, Gabrielle sure lived up to her reputation and far beyond – what a wonderful little light shining! Leni joined us for the next piece, a Scofield-inspired tune that I wrote entitled “Just Another Day At The Office”. The repeating melody pattern is relentless with slight displacements on top of a funk shuffle to express the sometimes frantic and relentless pace on teaching days at IU. Get ready for a groovy trombone solo by Reut on this one! Next up was a major challenge – my tune Cantos with lots of long unison lines and crisp tempo. With the expert guidance of percussionist Mayra Casales we found our equilibrium – watch out for the drum breaks on this one, Rosa is cooking! Talking about cooking, studio owner and host Andrea Valentini was working on a pasta dish for us – Italian delicatessen take time, hence we decided to attempt one more tune before dinner was served. This one was Leni’s African-influenced Bubbles. She confessed later that she wrote it for a pet monkey that she wished for as a child but never received. We sure had some fun with this tune! And boy was everyone hungry – 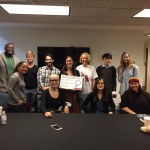 Andrea’s pasta dish was some of the best food we ever had. But we still had one more tune to go – Reut’s unique composition “I’m a Superstar”, a piece that she had written in our AirBnB apartment in Cleveland and we had premiered in Louisville. Reut shared her story during our educational programs and I was intrigued hearing about her fascination with avant-garde music. Her piece features various rhythmic and melodic fragments reminiscent of cubism. It’s meant as an affirmation for all of us  – our skills, our dedication to the music and to our loved ones, our support of each other, our struggles to make ends meet, which makes us all superstars. She provided us with a mantra – I’m kind, I’m good, I’m funny, I’m a superstar – thanks, Reut! 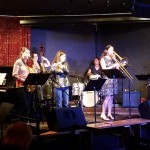 It’s hard to express how excited I am about the energy, the quality of music, the musicianship, the camaraderie, that we were able to capture during those three days. It’ll take a large amount of resources to mix, master, produce, design, manufacture the final product – help us make it possible by pre-ordering and/or choosing a special perk at our crowdfunding campaign – click here to learn more. And join us December 15 at Birdland for The Whole World in Her Hands live!