The ABC’s of Jazz

Can you teach jazz? Jazz and academia were at odds for half a century before a group of musicians and educators from Indiana helped codify the language and share the art form with the rest of the world. Often referred to as the ABC’s of jazz – Jamey Aebersold, David Baker, and Jerry Coker – met at Indiana University as teachers and students in the early 1960’s and collaboratively created a canon of instructional materials, curricula, and workshops that are essential learning tools for students all over the world.

Last Saturday, I sat next to Jamey Aebersold on a panel paying tribute to the legacy of David Baker. The stories and memories brought back the special conversations that I had with friends, family, and colleagues during the interview process for my book David Baker – A Legacy in Music. Below is an excerpt from the book that chronicles the period from 1965 into the early 70s that was so instrumental for establishing jazz education in academia. More info on the book is here – and as I watch the

mentorship and learning during our weekly jam sessions on Sundays at Players Pub as well as the young jammers who already play at a very high level – I witness the accomplishments of our ABCs in action. History will come full circle when Jamey Aebersold will be our guest musician for the next jam session on 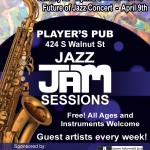 February 12 and several of our young students will receive scholarships for his summer camp during our final concert. The legacy of David Baker also lives on through his scholarship fund – all sales income from the newly released Basically Baker Volume 1 and 2 albums will go towards the fund available here. Being able to connect some of these dots is a true honor – enjoy this excerpt from David Baker – A Legacy in Music:

Coker’s predictions about pulling all factions together and creating extravagant presentations proved to be prophetic in many regards. A year earlier, David Baker had published an extensive article in Down Beat magazine entitled Jazz: The Academy’s Neglected Stepchild, documenting his vision for an ideal teacher of jazz as well as components of a jazz curriculum. He argued for hiring competent professionals as teachers, who had the skills and background to share their expertise with the students rather than the currently available and socially acceptable weak section player. “Why the almost systematic exclusion of qualified Negro jazzmen from collegiate and clinic jazz programs”? he asked, referring to the stereotypes of the Negro jazz musician as junkie, drunk, irresponsible, generally inarticulate and undesirable and the resulting play-it-safe policy in which the student suffers. Furthermore, Baker suggested the components of an effective jazz curriculum as courses in theory, history, style analysis of the works of great jazz composers, arrangers, and players, as well as improvisation. He even asked for a conference for jazz teachers, potential jazz teachers, and jazz names as a means for improving the quality of teaching through exchange of ideas and strategies. Arguments for the need of a jazz curriculum included diminished performance and jam opportunities, diversification of jazz styles, and increased availability of learning resources. Baker was extremely detailed in documenting the ideal jazz program throughout the article as exemplified in this excerpt:

The student must be made aware of the importance of pacing himself, of working toward specific climaxes in a solo. He must be taught the concepts of tension and relaxation, of understatement and subtlety, of mixing the novel and the old to heighten musical interest. He must be constantly reminded of the value of economizing, getting the most from the material available to him. A student needs to know from what sources he may get material on which to improvise. He should know that often the tune itself (melody, rhythm, etc.) can be his best source of solo material.

With such a detailed outline on the drawing board and despite resistance from some colleagues, the bachelors degree in jazz studies was approved in 1968.

I remember a man who unfortunately is dead now, because he was a good man, but he was pretty staunch in his belief that – he told me that, ”as long as I’m here, jazz band will never be a major ensemble.” Two weeks later, on a Thursday morning, it passed as a major ensemble.

At the zenith of the Civil Rights movement, students were ready and eager to learn about Afro-American history and traditions. When Baker put new courses together on jazz history and jazz analysis, the popularity was overwhelming.

One year I taught a course over in the business building, because there were so many students, probably 500 students in the class, as well as the fact that it was then sent out over TV to other branches of our campus.

Soon courses in jazz arranging, improvisation, and ensemble playing completed the degree program. Of course, the new demand was not confined to Indiana. College jazz programs blossomed nationwide and created a huge demand for instructional materials and jazz arrangements. In fact, during the last 40 years, jazz education programs have been incorporated into the course offerings of most colleges around the country.   Porter (1989) reports that the jazz program at the University of North Texas (at that time North Texas State College) was the first at a university dating back to 1947, followed by the Berklee College of Music in Boston. Some of today’s leading jazz programs can be found at Indiana University, the University of Miami, Eastman School of Music, the New England Conservatory of Music, New York University, and the University of Northern Colorado (Porter, 1989). The 2008 Annual Jazz Education Guide in Jazz Times magazine lists 361 colleges and 564 high schools in the United States offering jazz programs.   In comparison, 189 colleges and 50 high school programs were listed in the 1997 annual Jazz Education Guide. Presently, the jazz ensemble has become a regular institution at nearly all colleges and high schools.

The extravagant productions foreseen by Jerry Coker during his communications with Dean Wilfred C. Bain also became reality. In the oral history interview for the Smithsonian Institute, Baker remembered his experiments with avant-garde music and large productions during his first years at Indiana University.

You couldn’t get in a concert, whenever we played. And what we were playing was really out. I would have orchestras with people positioned all around the room, playing. I did a history of Louis Armstrong. It was an hour-long work. It started with trumpet sections [in] all four corners of the auditorium, and guys walking through, recreating the music of New Orleans. It was theater music.

Many years of playing, jamming, teaching, and developing ideas together proved to be the building blocks for a series of influential method books and a groundbreaking concept of music minus one recordings for three Indiana University alumni – Jamey Aebersold, David Baker, and Jerry Coker, often referred to as the ABC’s of jazz education. Jerry Coker’s Improvising Jazz was released in 1964 and according to Tanner’s 1971 survey report entitled “Jazz Goes to College”, quickly became the most widely used textbook for improvisation classes. The first edition of David Baker’s Jazz Improvisation – A Comprehensive Method for All Musicians followed in 1969 with a revised edition in 1983 as the first one in a long series of instructional method books. Fellow educator and trombonist Tillman Buggs remembers the novelty of the idea of writing a book:

David at that time once told me, I remember, we used to play duets early in the morning. I think he was on cello back then. This was after he played trombone, you know. He says, “Man, I’m going to write a book”. And I didn’t challenge it, but in my mind I just said: “Yeah, yeah. Yeah, David, I know you’re going to write a book. Of course, you look at the catalog now, and the rest is history. I mean, a book, a book?

One of Baker’s former students and fellow jazz educator Jamey Aebersold transformed the principle of music minus one recordings into a series of play-along records featuring the standard repertoire of jazz played by a group of outstanding performers starting in 1965. The opportunity to take the rhythm section along in the practice room and work up performance skills made learning jazz accessible to a much larger population and transformed practice techniques for aspiring as well as accomplished musicians alike. The series has grown to date to 127 volumes of play-along albums. David recalled:

J.J. Johnson would tell me, when he was just coming back from Hollywood and getting himself back into playing all the time, he said he would practice and practice and practice, and then, two weeks before time for the gig to start, he would get the Aebersold things out, go back in his workroom, and turn the thing up as loud as possible and play as loud as possible all day long with the records, and he would be in shape, when he would get ready to go. So Jamey has changed the way people think about how to learn.

The same core group of Indiana performer/ educators became instrumental in the formation of a series of summer jazz camps following the model of the Lenox School of Jazz and the Stan Kenton National Stage Band Camps. Most notable are the Jamey Aebersold Summer Jazz Workshops that have been running close to forty years now with week-long sessions and over 60 faculty members, Aebersold, Baker, and Coker among them since its inception in 1973. The first camp was an extension of a big band camp in Bloomington, Illinois with special combo instruction and a curriculum based on theory, master classes, and combo playing that is still in place. Aebersold believed that the success of their methods, materials, and camps was based on their genuine love of and dedication to teaching.

I think David’s approach to being all encompassing – you want the information, I’ll give you the information – that’s the way he’s always been. And I think it helped change jazz education. Well, jazz education hadn’t really started but these other people had the knowledge but I certainly never asked them questions and I don’t believe anybody else did either. … They didn’t sit down and talk about scales and chords and soloing and stuff like that, but David (Baker) did and Jerry (Coker) and other people and there was a sharing going on. I think it was great because if that hadn’t happened I don’t know what would have happened to jazz education.

Even Baker’s early vision of a conference bringing together jazz teachers, students, and professionals proved prophetic with the formation of the National Association of Jazz Educators in the late ‘60s. The group evolved into the International Association for Jazz Education (IAJE) and presented 35 international conferences presenting several days of clinics, discussions, concerts, and exhibits from 1975-2008.

This love for teaching, fueled by sincere dedication, was acknowledged by the jazz community in 2000, when Baker received the American Jazz Masters Award from the National Endowment of the Arts during a ceremony at the International Association for Jazz Education conference in New York. The 7,000+ audience members offered a standing ovation.