The Story Behind The Song – The Coventry Carol 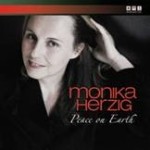 As we enter the holiday season, I’d like to introduce the story behind some of the songs that I recorded for the Peace on Earth release in 2008 on Owl Studios. My concept for the album was to create a collection of timeless songs for the season that transcend religion and culture and invite everyone to come together for some additional warmth, light, and love during the darker and cold season of the year. Especially now during times of senseless terror and civil war, music can heal and create community. I’d like to start the series with the Coventry Carol. On the recording, the Coventry Carol gets a fast and swinging jazz treatment with some virtuous blowing and of course a nod to the trademark Picardy Third. The idea to speed up this slow and waltzing old English carol came to me one early morning in June while preparing for the album. It was during the summer holidays and the family was home with lots of remarks on the process as they were eating breakfast while I was experimenting at the piano in the living room. Eventually it became a combination of a brass choir hymn intro and a hard blowing up-tempo swing – here is the video from the release party.

The Coventry Carol is an old English Carol dating back to the 16th Century. It’s based on the Gospel of Matthew and initially part of a mystery play called The Pageant of the Shearmen and Taylors. it refers to the massacre of infant boys under 2 years in Bethlehem ordered by Kind Herod who feared for his throne as the birth of a new king was announced. The text is envisioned as a lullaby sung by mothers of their doomed children – a heart-breaking story!

O sisters too, how may we do
For to preserve this day
This pore yongling for whom we do singe
By by, lully, lullay?

Herod, the king, in his raging,
Chargid he hath this day
His men of might in his owne sight
All yonge children to slay,—

That wo is me, pore child, for thee,
And ever morne and may
For thi parting nether say nor singe,
By by, lully, lullay.

Below are further contemporary versions of this lullaby – it’s interesting how a song can take on a variety of cultural placements and meanings.
Sting
Annie Lennox
Christine McVie
John Denver
Sufjan Stevens
Tori Amos