The Whole World in Her Hands – FAQ 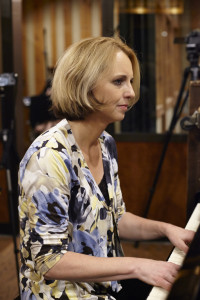 It’s been an exciting journey from the original idea to recording the music and receiving lots of support during the crowdfunding campaign.  Here is a summary of some of the questions that came up so far – a list to be continued as this project develops!

1. What inspired you to organize The Whole World in Her Hands?

I’ve been an advocate for Women in Jazz for many years – obviously based on my own experiences as a female jazz performer in a male-dominated environment.  In talking to my fellow musicians, I realized that there were some shared experiences in terms of early opportunities and the need for role models.  Hence, I decided to showcase these amazing ladies as role models for our next generation and as the outstanding musicians that they are.

2. How did you select/find the other musicians?

I knew Leni Stern and Jane Bunnett from different encounters over the years.  Anna Butterss and Arianna Fanning recently graduated from Indiana University and had performed with me many times during their student years.  Jane is a good friend of Jamie Baum and connected me with her.  I had met Mayra Casales before through my manager and producer Suzi Reynolds.  Mayra recommended some of her band mates from her group Cocomamas – Jennifer Vincent and Reut Regev.  More Suzi recommendation were Lakecia Benjamin and Linda Oh.  When I reached out to them, they all gave me an enthusiastic yes.  There were several others that wanted to participate but the timing didn’t work out.  Hopefully we can continue recording and performing and involve many more.

3. How did the other musicians react to the project?

Everyone immediately wanted to participate and confirmed the importance of telling the stories and showcasing the (wo)man power.

4. How long did you rehearse together?

We shared the charts and rehearsal recordings through files prior to getting together so everyone could learn the tunes.  The first recording session was at NYU in May with Anna Butterss, Arianna Fanning, Leni Stern, and Jane Bunnett.  We rehearsed for four hours the day before the session.  The second recording date was in August at Avatar Studios with Linda Oh, Jennifer Vincent, Arianna Fanning, Lakecia Benjamin, Reut Regev, Jamie Baum, Leni Stern, and Mayra Casales.  For this session we rehearsed for eight hours the day prior to the session.

5. How long did the recording take?

For the NYU session we had to wait until the end of the last class at 5pm.  It took several hours to set everything up and we finally started recording at 8pm.  Poor Leni had the flu and by 10pm she had to give up.  The rest of us continued until midnight and we managed to record seven tracks that evening.  At Avatar we had a whole day from 10am to 11pm.  We recorded six tunes and added several tracks to the NYU recordings.  Most tunes were done in two or three takes.

6. Why is this project recorded without label support?

I previously recorded for Owl Studios, but the company was sold and is not producing any new recordings at the moment.  Due to dwindling sales and economically hard times, many labels have disappeared and the few remaining ones have limited budgets and full rosters.

7. Who wrote the music for The Whole World in Her Hands?

I wrote and arranged most of the music for the project.  In addition I asked the other musicians to contribute their music.  Reut Regev, Leni Stern, Arianna Fanning, Jamie Baum, and Jane Bunnett added a tune each to the mix.

8. Why did you chose to do an Indiegogo campaign?

This project is very expensive due to the amount of artists, the high quality studios and engineers, travel costs, New York’s generally high prices, and the video and photo footage.  I financed everything from my own savings and my funds have run out.  The Indiegogo campaign will offset about a fourth of the initial recording costs.  My hope is that getting the support funds will open the door for further grants and sponsors to eventually produce a documentary from the amazing video footage.

9. What is next for The Whole World in Her Hands?

The project is currently in the mixing and mastering stage for the audio portion.  As soon as we have the finished master, we will try to get some label/ promotion support for a release.  In the meantime, I’m lining up a series of live events for March – Women’s History Month, and April – Jazz Appreciation Month.  After all the support for an audio release is secured, we will work on creating the documentary and tour the music all over the world.

By going to http://igg.me/at/monika before December 4 and claiming any of the rewards – just a pre-order of the CD is an amazing way to support this.  All our supporters also will get additional rewards and special footage as well as special offers for the release events.  You’ll become part of a community that will come along on the journey.