The Whole World in Her Hands On The Road

The Whole World in Her Hands was released on June 10 on Whaling City Sounds and has been climbing the Jazz Radio Charts at a steady pace – hitting the Teens this week. Here is the making of video. 2016 is a milestone year with the first female presidential candidate and good chances for winning. Nevertheless, gender equality still has a long way to go especially in instrumental jazz with professional participation lingering in the single digits. Research has shown that creating role models is highly effective for changing participation patterns, hence we’ll continue with our mission to showcase amazing role models on the road and in the studio. I’m excited to announce the Fall Tour for The Whole World in Her Hands and the recording of our second album. 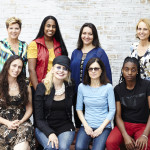 We will hit 10 cities in 11 days from Philadelphia to Indianapolis with an all-star cast and new repertoire. Here is the line-up and the tour schedule with links to the venues – stop by and share with friends! If you’re interested in being a sponsor for the tour and/or the album, please send me a note at mherzig at indiana dot com – there are options including two slots to be Executive Producer.