It’s that time of the year where everyone reflects on the year gone by – highlights and struggles and goals for the next year. Tonight is Winter Solstice – plenty of dark time for introspection. Alright, here it is, my monthly highlights from 2015.

January in San Diego with 70 degrees and an open pool during arctic temperatures in Indiana, who could ask for anything more? Well, this was the first conference that featured my newly organized research track and poster session. I oversaw more than 40 presentations on new directions in jazz as well as led the late-night jam sessions and various panels and performances. The little time I got at the pool was well-deserved!

Yes, we live in Indiana and there are neither mountains nor snow, but we have our little ski resort – Paoli Peaks. And especially during the season when there is little incentive to move and go outside, this sport is perfect to get fresh air, sunshine, exercise, family time, and keep the winter blues away. Give it a try sometimes! 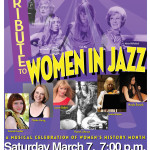 It’s a tradition now, every March I gather all the fantastic jazz ladies from the region and beyond for a series of feature concerts.  This year we were able to invite fabulous flutist/ composer Jamie Baum from New York to join us and also be a featured guest for the Future of Jazz concert. Our performance at the Jazz Kitchen went especially well with a maximum capacity audience – it was great to see all the support. Hopefully we won’t need to do feature concerts anymore soon and the support will be there all year long!

What an honor to be named a Jazz Hero for Bloomington by the Jazz Journalist Organization. With an official declaration and a good amount of Brother Thelonious Ale, I became a hero – pretty cool. And in conjunction with International Jazz Day, my three favorite David’s – David Baker, David Williams, and David Brent Johnson discussed the history of Indiana Jazz with anecdotes and facts and exhibits. I would declare April 2015 as a successful Jazz Appreciation Month. 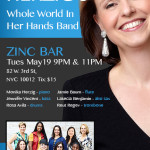 Thanks to a special invitation to Spotlight on Jazz and Poetry Live in Philadelphia, I planned a big road trip up to New York and back with performances in Cincinnati, Washington, Philadelphia, Charlottesville, and the inaugural live outings of The Whole World in Her Hands in New York at the Zinc Bar and Shapeshifter Lounge. Here is the whole set from Shapeshifter Lounge. After a rough semester, the successful performances helped me get back on track and restore happiness. The best anecdote was my jam session night at the Zinc Bar when I got to play Caravan with Esperanza Spalding without even knowing it since she was in disguise – 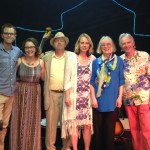 June is a special month for me since it’s my birthday under the sign of Gemini. We started an annual Gemini party/ jam since so many of my friends and heroes are born under the same sign. There is something to astrology – and I do believe that creativity, intelligence, leadership, and kindness are traits that we share. In addition to our annual party, we did a birthday tribute to Cole Porter who was born June 9 at the Harlequin Theater in Columbus. We decided to make it an annual tradition since it worked out so well! 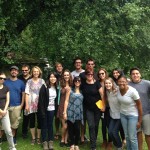 Of course we always visit family in the summer, but this year travels were extended to the International Society of Improvised Music Conference close to Montreux, Switzerland and the first overseas class in Graz, Austria. It turned out to be an incredible experience. In Switzerland we got inspired by the wonderfully free and creative spirit of improvisers in any genre and in Austria I had the most wonderful group of students come along with me on a series of life-changing cultural experiences. We’ll do it again this year!

August – The Whole World in Her Hands on Tour 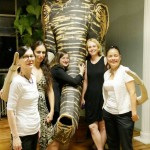 Music and outdoor festivals are part of the summer experience. This year I was able to put together the first week-long tour for The Whole World in Her Hands Band with five special engagements in Philadelphia, Washington, Richmond, Charlottesville, and Morgantown. We started out with Barbara Montgomery at her Farmhouse Retreat in the Philadelphia area for a space to rehearse and get energized. Jamie Baum, Reut Regev, Adi Meyerson, and Rosa Avila joined me for the adventure and the fellowship and musicianship made this one of the most memorable weeks in my life. Thanks to everyone who made it possible!

With the support of the Sister City Committee of Indianapolis and Cologne, we were able to bring in cellist Manuel Fischer-Dieskau to perform David Baker’s cello music in a program focused on the connection of Bach’s philosophy and Indiana jazz. We did a series of four performances at the University of Evansville, Auer Hall on the IU Campus, a house concert, and the Indianapolis Central Library. The response to each of those performances was incredible – and of course it was a special treat to have the audience give a standing ovation to David Baker himself at the Bloomington concert. We just found out that the program at the Central Library was awarded the best program award for the US Sister City Initiatives.

Some of my dearest friends are born in October and I’m immensely grateful for the friendship and the support in good and tough times. Being a musician, it’s not always easy to carve out time to spend with friends and family as work schedules are at opposite hours. But one beautiful Sunday afternoon this October we decided to just take the paddle boats and spend time on the lake together – one of my favorite memories this year!

One of my current research projects investigates the model of the jam session as a tool for entrepreneurship development. The unit of a jazz combo and the interaction of jazz musicians on the bandstand models a variety of factors that can be transferred to the interacti 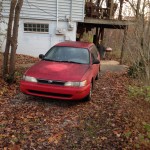 on in any entrepreneurial unit. Together with my current collaborator Maks Belitski at the Henley School of Business in the UK, we have developed a series of papers by now that develop the model and provide transfer options to business units. I presented a lightning talk on the model for the Center of Women in Technology at IU this November – enjoy it here!

Our faithful companion – a red 1994 Toyota Corolla Wagon – finally went to car heaven after the breaks went out. It had crossed the US twice and the engine had traveled to the moon and halfway back! 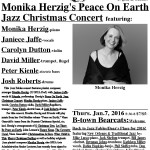 It’s the season to be jolly – and be proud parents when watching the kids perform with the High School Choir, the Musical Arts Youth Orchestra, the Hip Hop Dance group, Aerials, and Dena’s string studio. A great conclusion to the holiday concert season was our annual Peace on Earth concert for the Jazz Fables series. We shared music and stories with a capacity crowd and the love and warmth in the room will carry everyone well into 2016. Thank you for a great year!