This Is How We Do It! 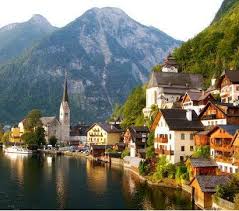 Just a few more weeks and we’ll arrive in Graz/ Austria with 15 IU Students for a summer course entitled “Comparative Music Industry”. Our goal is to learn about the Music Industry in Europe and compare practices to the American industry. For two weeks we get to meet regional professionals and discuss similarities and differences among continents. Of course, we’ll explore the beautiful surroundings too – Tosca in Vienna, Vienna Boys Choir, hiking in Styria, and much more. So honestly – what do you know about the European Music Industry? Think about it for a minute then read on – here are some fun facts:

1. Consumption of music now is mainly through streaming, a new model with royalty payments in flux and much lower than through music purchases.  We heard about the issues recently thanks to Taylor Swift speaking out on behalf of the artist community towards a better royalty payment structure. The main issue is that services such as Spotify offer free subscriptions with only ad-generated revenue which makes consumers expect music as a free commodity and generates much smaller income than subscriptions.  Here is a comparison of paid vs free streaming subscribers for the US and the leading European countries – notice a difference (especially in Sweden, the home of Daniel Ek, the founder of the biggest streaming service Spotify)? 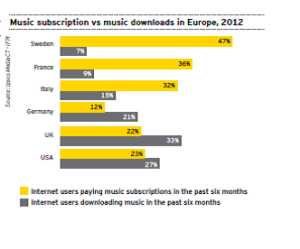 2. Even though government support overall has diminished some in Europe it is still much more significant than in the US in terms of per capita spending.  For example, US government spending on the arts equates about 40 cents per person compared to about $20 per person in Germany. The Swedish Arts Government grant allocates the equivalent of $15 Million for its only 9 Million people. Germany boasts 140 publicly funded theaters and 130 concert and theater orchestras – no other country in the world comes even close. 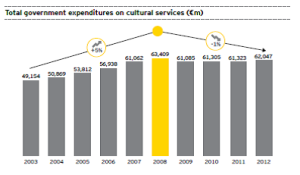 3. The total music markets worldwide divide up into about equal shares of a third into the North American market, the Western European Market, and the Asia Pacific Market, with small contributions from the Latin American Market. An interesting fact is that physical sales are still very strong in the non-US markets, so don’t give up on those CDs yet – sell them overseas! 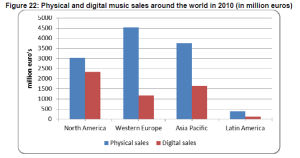 4. Finally – getting an education as an artist is mostly free or minimal cost in Europe as Universities and Conservatories are subsidized by the State, BUT the entrance exams are at very high levels. Once a degree is earned, artists are considered self-employed and receive a 50% reduction on health insurance as well as access to a variety of grant and fellowship opportunities. In contrast, US artists graduate with large amounts of debt for their expensive degrees and access to health insurance is expensive.

These are just some broad comparisons and after we immerse ourselves into the Austrian culture and learn from the various experts coming to our class, I’m sure we’ll have much more detailed updates – stay tuned!