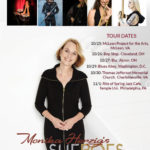 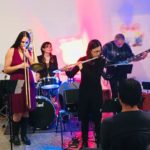 Our first stop was the McLean Project for the Arts in McLean, VA. This is a studio/ exhibit space run by a collective that features classes, exhibits, and the occasional concert. Our friends Ken Avis 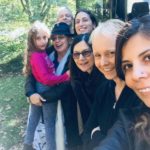 and Lynn Veronneau, also known as the world jazz group Veronneau, were kind enough to organize the event. The crowd was seated in a half circle in the gallery and very attentive and supportive. Reut’s daughter Liana became very inspired and created drawings that she shared with the audience.

After a long drive to Cleveland, we arrived at the Bop Stop run by the Music Settlement. I love the concept of the jazz club generating funds for the Music School. It’s also a beautiful space managed very well. In addition, local art work and local cuisine rounds out this true community endeavor. We found our groove that evening  – thanks to Gabe for the invite, we’ll be back! 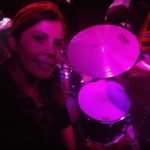 evening performance at Akron’s Blu. We started with a workshop for the community and answered questions about our journey.  This club is certainly to be recommended as a great listening room.

After Jamie’s flute workshop at the University of Akron, we continued to Bridgeport, WV for dinner and board courtesy of the WV Jazz Society. Eric Spelsberg, founder and 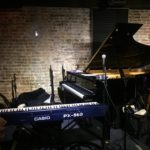 president, has created a jazz scene in the area with much cultural and economic impact! And with his support we made it to Washington the next day well-rested and nourished. We had the great honor of performing in Georgetown’s legendary Blues Alley. Even though it was a Monday night, we had a nice and enthusiastic crowd and the band was on fire. A shout out to Casio for providing me with a Privia keyboard throughout the trip so we can groove on “Ain’t No Mountain High Enough”.

That night we continued to Charlottesville, VA. The Charlottesville Jazz Society is another nurturing grass roots organization that presents concerts 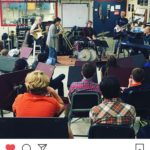 and workshops and creates jazz audiences. The next afternoon we taught a clinic at Albermarle High School in Charlottesville. One of our main lessons is to talk about our goal of providing role models towards change. When it came to playing a blues with the band, we made sure to encourage at least as many girls to participate – it worked! The evening concert took place at the Jefferson Memorial Church with a small but mighty crowd. The sound in the church was gorgeous and the music had developed with some very special 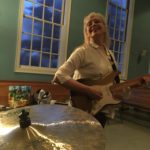 interplay by this point. Hopefully we’ll be able to share some of the video footage soon. 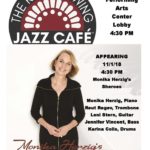 For our final concert at Temple’s Performing Arts Center Series “The Rite of Swing”, we had to drive all the way from Charlottesville back to New York to return our 15-passenger van, make sure Reut’s daughter gets to trick or treat on Halloween night and 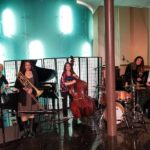 then gather back in Philadelphia. The concert was recorded live by WRTI to be 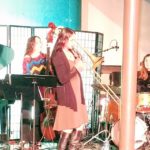 aired soon with interview. We were happy to welcome fellow Shero Sherrie Marricle in the audience who has paved the way for a lot of us by leading the cutting edge Big Band Diva for 25 years now.

Putting a tour like this together, managing all the daily needs, driving, food, rooms, setup is a very intense and time-consuming business. The back lights of the rental car go out which means a stop at the body shop, the venue address is wrong on the itinerary which means another half hour driving at the end of a long day and missing dinner, the air mattress is in the AirBnB can’t hold the air and we’re a bed short – problems need to be solved constantly often causing stressful situations. Economically, a tour with such a large group is a deficit endeavor for the band leader. Clubs can’t pay enough to cover fees for six, transportation, lodging, food and a day without performance eats even further into the resources. But the moments when the music comes together, when the musicians become one unit, when the compositions and arrangements touch the audiences are the reward for all the hard work. One of the audience members at Blues Alley told me about their crappy day and how the music made them feel so much better. The Charlottesville Jazz Society cooked us dinner and we shared not only the music but the food. Moments like these are special, uplifting, and healing and I wouldn’t trade anything in the world for being able to experience them. Thanks to everyone who contributed to the Sheroes 2018 Fall Tour!