The news spread fast on Monday – Indianapolis lost one of the most talented, beautiful, kind members of its jazz musician community, vocalist Cynthia Layne.  Throughout my 20+ years as a member of the community our paths have crossed many times and in many ways not only as colleagues but as mothers and label mates.  Just this past April she was the featured artist for my “Introduction to Jazz History and the Indianapolis Jazz Scene” class and told her story of her blossoming music career to the class members and also of her battle with cancer which she was determined to win. We shared the stage that night, paying tribute to the Great American Songbook and living the moment of jazz. I’m glad we had the opportunity and it’ll be one of my most cherished memories.  Our careers were parallel in many ways, we are the same age, we started around the same time in the same community, we had daughters around the same time, we were signed to the same 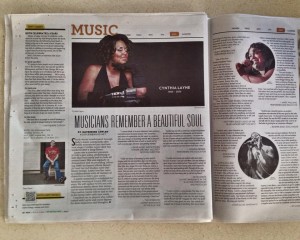 record label for the same amount of time until the label was sold, we shared many of the same stages, we were often the only females in our groups, we wrote original music, and so much more.  On the other hand there were many differences – race, performance medium, daytime jobs – and of course, the cancer.  While I was worried about issues such as not enough gigs or not getting paid enough or having to teach too many classes, she worked through endless sessions of chemo therapy while keeping her spirits up with performances and taking care of her beautiful daughter.  I never heard her complain – just like the title of her recording, she was a beautiful soul and we all miss her very much.  Nothing will ever be able to close the hole and empty space that she left in our community – enjoy every moment, don’t fret the small stuff – lesson learned!  Miss you, Cynthia.

Here is a Beautiful Soul

And here is a great tribute from the music community